The Nutty Buddy Collective is: 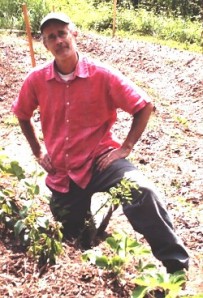 Bill Whipple began his agricultural career at the age of 18 picking apples in Washington state and later picked 5 subsequent seasons. In 1983 he earned a one year degree in agriculture from Sterling College and homesteaded in West Virginia where he has been commercially growing chemical free pears for 28 years. From Barkslip’s Fruit School he founded the Buncombe Fruit Nut club whose primary objective is to advocate and rally support for for community orchards in public parks. He implemented two edible parks- one at West Asheville Park and the other in North Asheville at the “Flint/ Magnolia park”, and has helped maintain all the Edible Parks in Asheville for the last 12 years. After attending a Northern Nut Grower’s association national meeting he became a nut passionado and from all these confluences the Nutty Buddy Collective has formed.

He leads Barkslip’s Fruit School, teaching the public how to care for fruit and nut trees.  He also offers his services to the private sector as a consultant and lecturer, using his 20 years of agricultural experience and permaculture training to help people live more abundantly and harmoniously with their environment.

sees his work in foraging, permaculture, and agroforestry as a vocation to which he was called at an early age. Growing up in New York’s Hudson Valley, one of the great apple growing regions of North America, Justin cherished annual family outings to pick fruit in the orchards and has always held close the sense of peace and plenitude he found there. However, it wasn’t until after graduating from the University of North Carolina Asheville, with degrees in Jazz Studies and Spanish, that he became interested in horticulture. A strong passion for ecological restoration and for responding to the challenges of climate change drove him to study permaculture after college. Since taking a permaculture design certification course and subsequent apprenticeship in 2010-2011, Justin’s career has been dedicated to building community resilience and connection to the more-than-human world. Justin has worked as a freelance permaculture designer, completing edible landscape and garden designs for numerous single-family homes, a multi-unit apartment complex, and community and school gardens. He practices, has taught workshops on, and presented at conferences on permaculture, milpa agriculture (traditional Mesoamerican agroecological farming practice), fruit and nut growing, experiential education, foraging, and on the many uses of kudzu. He worked for five years with the Roots Foundation, building outdoor classrooms in public schools and training teachers in the practice of ecology-connected, project-based learning. Besides the Nutty Buddy Collective, Justin is a co-founder and partner in various cooperative agroecological projects, including Kudzu Culture and the Asheville Nuttery. He is a guide for No Taste Like Home, one of the top foraging tour companies in the world, and serves on the board of the North American Fruit Explorers. 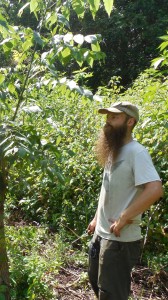 Greg Mosser grew up in his family’s orchard and garden and surrounding countryside and later earned a B.S. in Biology in the pursuit of spending more time in the woods. He got the bug to study perennial foodcrops and systems in about 2005 and has been involved with the public plantings in Asheville since 2010. He’s a big fan of perennial vegetables, root and tuber crops of all kinds, and tree crops.

Processing…
Success! You're on the list.
Whoops! There was an error and we couldn't process your subscription. Please reload the page and try again.